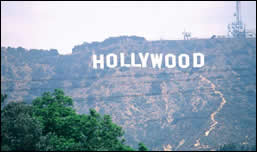 Life was very laid back in the Hollywood scene. The girls went out on garbage runs every day, getting perfectly good food that was tossed out into bins behind Brentwood and Pacific Palisades supermarkets. Eventually I started taking them on the runs in my truck and I found out that before it was wrecked they'd used Dennis' (the drummer of the Beach Boys) Rolls Royce for their foraging trips to the dumpsters.

We listened to a lot of music. The music was always there, always going, singing and making a world -- saying there was something beyond the senses, something brighter, wilder, truer -- saying that love was all that really mattered.

People came and went, a peculiar mix of young dropouts like me, drug dealers, and people in the entertainment business. It was a strange time in Hollywood. It had become chic to play the hippie game, and the children of the big stars partied with gurus like Charlie Manson and listened to them and bought drugs from them and took hippie kids to bed and let them drive their expensive cars and crash in their Bel Air mansions. Everybody felt aware and free. After August 1969, all that would change and those gentle children with flowers in their hair and tabs of acid in their pockets would suddenly seem menacing and dangerous. The Beverly Hills-Hollywood circuit would snap shut like a trap.

Now life was one big party. Rock musicians and hopeful singers like Charlie, actors and hopeful actors, girls who didn't do anything, producers like Terry Melcher (Doris Day's son), talent people, managers like Gregg Jakobson, and stars' children would all come over to the house and it would be a drug circus. Charlie always managed to show up for the parties. And he did it well, playing the free, spontaneous child, the holy fool, turning his self-effacing charm on a pretty young celebrity's daughter with twenty different kinds of pills in her purse, giving her a ring and asking her to come join his Love Family. She kept the ring but drove home in her sports car with her boyfriend.

I'd been afraid of anything heavier than grass since my experience chewing up rosewood seeds, but seeing all these beautiful, sophisticated people who could spend half their lives on one kind of high or another made me think again.

I saw how crazy I'd been to turn my back on all these good feelings, all this awareness and openness and love, just because of one bad trip on the seeds. I tried peyote, then mescaline, then speed, then some synthetics you smoke with grass. Suddenly the whole world opened up like a flower that I'd never seen except as a bud. Colors came alive, throbbing with energy; simple objects became fascinating in their textures and shapes and mass; things like the sky or a blade of grass or a girl's hair could make you laugh for crazy joy. Time and space suddenly weren't the constants they'd always been. When you were on speed, time could race past you, jerk to dizzy starts and stops, leap over itself altogether sometimes.

Solid objects could become fluid, dripping into new forms like something out of a Surrealist painting. Music wasn't just sound; it became a physical thing, bathing you, rolling over you like breakers, sweeping you up and carrying you with it while you felt it inside as well, picking up the beat of your heart until the music was truly "within you and without you," just like the Beatles sang.

During my first year in California, I'd managed to drop out of college, give up my job, and turn my back on my family. Hope in my country, in my parent's way of life, and most importantly in myself, slowly gave way to drugs and rock 'n roll. Over a period of time, my so called Hollywood friends went their own way, Manson's philosophy turned out to be a lie, and drugs did not satisfy.

As I reflect back on what some would call the "good old days," I see those days in a different light. In reality, I'd been eating out of garbage cans, running with the Hollywood set, who also, had turned to music, drugs, and to gurus like Charlie for answers. What offered a quick fix (delusional at best), turned into no future at all. My mood turned to hopelessness, helplessness, and despair. Drugs no longer relieved the pain, as all hope in the future vanished.

Why did I have so little hope in the future? My parents wondered how this heartbreaking situation could be possible. It seemed as if my very heart and soul had been torn out of me. It would be easy to blame the state of affairs in the country, the Vietnam War, unemployment, disaster, disease, world hunger, and in my case, music, drugs, Manson, and brainwashing. But these were not the true cause of my hopelessness and despair.

My parents were wonderful, raising me with lofty goals in mind. Both my brother and sister were college graduates, so it couldn't have been the climate of my upbringing. But some way, because of my own rebellion, I had problems in forming positive attitudes. As a result, I didn't have the determination and hope necessary for facing the future. My lust for things made me easy prey for the high life, rock groups, and cults, while knowing little about the history of man and less about the great promises of God. Slowly, I'd succumbed to a suffocating, hope-robbing pessimism, and as a result, I became angry at the world, and began to medicate my pain with drugs.

After the crime, I realized I'd committed one of the most hideous crimes of the century, ending up on death row. My attorney gave me hope that it would never be carried out. In 1972, the death penalty was abolished, declared unconstitutional, cruel and unusual punishment.

I was transferred to California Men's Colony. It was like moving from the basement to the penthouse. I'd been given a second chance. Hope came alive. I was given a job, and signed up for wood hobby, making toys. Friends and family visited me regularly. People were even friendly. But still, I didn't know true peace, love, and hope, which didn't come until Jesus Christ came through the Holy Spirit to live in my heart in 1975.

In the past, my dark side was seen; hate, greed, pride, lust, and destruction. I'd been filled with pride, lust, fear, guilt, and frustration, leading to despair and hopelessness. But now, from my innermost being flow love, faith, hope, and courage. I'd truly moved from the basement of life to the penthouse.

Instead of believing Manson's lie of the end times, Helter Skelter, hope was revived in the return of the true Jesus Christ who says, speaking of the last days, "And then if anyone tells you, 'Look, here is the Messiah,' or, 'There he is,' don't pay any attention. For false messiahs and false prophets will rise up and perform miraculous signs and wonders so as to deceive, if possible, even God's chosen ones...However, no one knows the day or hour when these things will happen (Jesus' coming), not even the angels in heaven or the Son himself. Only the Father knows. And since you don't know when they will happen, stay alert and keep watch" (Mark 13:21,22,32,33 NLB). The Scriptures encourage us to be joyful, optimistic, hopeful, and to believe the best.

I've learned from my experience, but it takes a wiser person to learn from the experiences of others. I am not a role model, but I pray for people to be saved from unnecessary mistakes and conflicts and for the Lord to lift them up in hope.

Do you realize we have more penthouse people to draw from than any other people in history? These are people we utterly trust and admire, and to whom we can reveal our dark sides, knowing we will be loved and prayed for. This is part of what the church of Christ is all about.

I hope I'm a penthouse person, giving hope. I desire to be a penthouse voice. There are enough spreaders of gloom and doom. We don't have to buy into the despair of our day.

God gives hope. Hope is not wishful thinking. Hope is knowledge that the wonderful promises of God are true. There are numerous promises God has made to us. Read them for yourself. Start with Romans 8:28, "And we know that God causes everything to work together for the good of those who love God and are called according to his purpose for them" (NLB).

Or consider Isaiah 41:10, "Fear not, for I am with you, be not dismayed, for I am your God! I will strengthen you, yes, I will help you; yes, I will uphold you with My vindicating right hand" (MLB).

Or look at Psalm 34:19, "Many are the afflictions of the righteous; but out of them all the Lord delivers him" (MLB).

Today, we need hope to face an uncertain future. The situation does not look good right now, but as we encourage one another in faith to face the future, we will be prepared and will do well. We must give one another confidence, courage, moral strength, and a sense of responsibility. But we cannot give each other these priceless assets without hope -- the sure knowledge that God exists, that He loves us and that His promises are true.

Let us encourage you, as a dispenser of hope, and help you along in life. I guarantee you that it really pays off to be a penthouse person, free from basement living. Let's grow together, and become more like Christ, the ultimate penthouse Person.

Our Web site presents to you the beauty of God's Word. We suggest, especially to those who are new Christians, to obtain a New Living Translation Bible (Tyndale House Publishers), at their local Bible book store. It is clear and precise in sharing the simplicity of the Good News of Jesus Christ. Won't you draw near to God today?