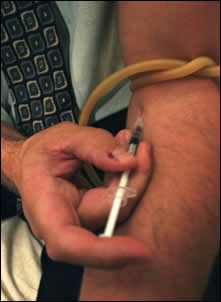 Our purpose is to share the answer to the drug problem. The answer was shared with 300,000 people as Bob Dylan performed for Pope Paul. The pontiff told the crowd that, "...the answer to life is blowing in the wind...the wind that is the breath and life of the Holy Spirit, the voice that calls and says 'Come!'" He that has an ear, let him hear!

Late in 1974, it seemed that everything started going stale. My heart was filled with pain, and void of true love and peace. I can't fully explain what was happening to me, but I realized that it was the Lord -- as that great Christian Saint Augustine said -- "...the heart of man is restless until it finds its rest in Thee."

Augustine knew what he was taking about; he'd spent a lot of years running from God himself, just as I had. But it was time to stop running and face the inescapable love that was being poured down on me in spite of my disinterest, in spite of all I'd been and done. I'd previously tried to kill the pain through drugs, but now it was time to listen.

I had no way of knowing it then, but hundreds of people across the country were praying for me at this time, not just my family and the little church in Copeville where I grew up, but all kinds of brothers and sisters who God touched with a concern for me. I know now that all good comes from the Lord, but I will always be grateful to those people as well, many that I'll never even know about in this life, who were willing to trust the shocking promise of God that there is no soul so corrupt that His grace can't heal it and make it new.

Their faith in the face of what would seem so obvious to the world -- that someone like Tex Watson was beyond hope -- was the instrument of God's full salvation in my life and I praise Him for it.

Is your drug problem recognized today by friends and family, who are reaching out with love and care to help you? I'm so thankful that my family, friends, and other Christians reached out to me from all directions to show me the way. But not until I opened my heart to receive help, did deliverance come.

Finally, in May of 1975, the last night of a prison revival, I decided that this had to be it; I couldn't play games any longer. I understood very clearly what was being offered: God who made us, God from whom we'd turned away to follow our own selfishness, God who wanted us back as His sons and daughters, wanted me back. To bridge the gap between us, He'd sent His own Son to take our death -- the inevitable consequence of our sin -- on Himself. That act of pure love had not only opened up an eternity of fellowship with our Creator in this life and the next, it made positive change and renewal possible in our lives right now, in my life right now. It began a process of slowly becoming the whole person one was born to be, of becoming more and more like Christ Himself. It wasn't just a fire escape -- that actually had very little to do with it -- it was letting ourselves be participants in a total victory over evil and death that was already won because Christ had risen from the dead. It was deciding that His Kingdom and His will for us were the only things that really mattered. Having decided to give Him our whole lives, we are to let the mighty Spirit of God come into our own spirits to start building the life of Christ in us, and to enable us to do the service to which we are called.

That is what it is all about, I thought, as I sat in the back of the chapel on the last night, sensing that the Reverend DeVito was reaching the end of his sermon. I knew the Lord had the peace and love for me that I was looking for all my life. When the invitation was given, I went down to receive this new life. The power of God filled my life as the minister prayed with me.

I haven't been the same since that night. I remember returning to my cell, looking in the mirror, and seeing my face aglow with Jesus. I was ten times higher on the Lord than ever on drugs, I thought, and this was free. As my face continued to glow, I knew right then and there that I would never use drugs again. Nothing could compare to the love and peace of God.

I was baptized fifteen days later in a large plastic laundry cart in the garden outside the prison chapel. It was big enough for me to go completely under the water and die there with Christ. No matter how silly it might have looked to someone from the outside, someone who didn't understand all that was going on in that moment, to me it was as glorious as the River Jordan where John baptized people in preparation for the coming of the Messiah. My Messiah had come, at last; He had come to me and I was His. As I burst up out of the water and it spattered off me like liquid fire in the sunlight, I felt all that horror and guilt that was rightfully mine splash away with it. All the weight of what I had done and had been was gone.

That night two weeks before, when I'd stumbled forward in the chapel, I'd finally had a full realization of exactly what I had done, a realization so devastating that all I was able to do was weep for what seemed like hours. Now that burden was lifted; I would weep again, many times, for those I'd hurt -- the dead and the living -- but from now on it would be tears shed in the certainty that the punishment for that hurt had been taken and the debt paid -- not by me, but by God Himself. If that sounds like unmerited grace, I suppose it always is for us, but for God the cost was immeasurable. Who are we to reject His gift because we can never pay for it? That's what a gift is all about -- a free, spontaneous act of love.

Paul wrote in a letter to the squalid, backbiting, sin-filled church at Corinth, "Therefore, if anyone is in Christ, he is a new creation; the old has passed away, behold the new has come" (2Corinthians 5:17 RSV).

That's how God sees it. We live it as a process and a promise. The Lord promises to free you from drugs today, if you will only receive Him as your deliverer.

There's an epidemic in our midst! A plague so ominous, so black, so evil, it hovers over this modern day age. Its victims are consumed to the very depths of their being. They are snared and held in bondage, tormented and tortured inside out. This plague knows no social barriers. It consumes rich and poor alike and is color blind as it grabs one's life and gains control of the depths of the soul.

This vile disgusting creature is called CRACK or rock. Technically it's the derivative of cocaine base. It promises you the moon and gives emptiness and misery instead. It deceives you. It holds you in a demonic bondage of twisted satisfaction, pain, and torture. It offers you a fleeting euphoria that turns in the end to despair and emptiness. Like a deadly cobra it spits poison: fear, paranoia and mental insanity. Its victims become prisoners held in bondage to the craving for the need for a taste, for that momentary ellusive euphoria or high. Prisons are full and grave yards are packed to testify of the heinous effects of crack or rock cocaine.

The fact is that this plague is Satanic. The Bible portrays the character of Satan and his influences. For instance, in John 8:44, he is described as a murderer from the beginning. This is evident as we see the deaths caused through drugs and alcohol, violence and sin. This verse also states that Satan is a liar. He is the master of deception and has deceived multitudes to seek false satisfaction through a drug or alcohol high. But this is all a lie! There is no real satisfaction in a drug high. It's all Satanic deception and the end result is pain, emptiness, and inner misery. The final end is torment of the soul, not peace, joy, or tranquillity.

Further on in the Bible in John 10:10, Satan is called a thief who has come to steal, kill, and to destroy. Crack, cocaine, and the drug high, the partying lifestyle is one of the numerous tricks he utilizes. I see and talk to the men incarcerated in prison. I've seen the pain as I've looked into the eyes of a 17-year-old and the young people who would steal from their parents in order to get high. Yes, I've seen and experienced the reality of Satan's tactics. He's out to rob, kill, and destroy. But there's a cure! There is a solution to the plague that rumbles in our midst. There's a source that will supply the joy, peace, and freedom for which the soul of man craves and cries.

My friend, that source is JESUS CHRIST. As one comes to Him and experiences His love and the forgiveness that's through His Blood shed upon Calvary's Cross, they find freedom and satisfaction. John 8:36 says, "If the Son therefore shall make you free, ye shall be free indeed." Only in Jesus can we find the peace, joy, and liberty the soul seeks. He is the ROCK that never falters. As one comes to Him, admitting they are sinners and asking God's forgiveness, receiving his love, mercy, and redemption, they taste of God's grace. As one repents and turns from his sinful wickedness and turns toward God, he experiences the peace of Christ's righteousness, and the joy of salvation.

Jesus is the cure. He is the solution to the emptiness and pain of your soul. Pray and ask God to set you free, trust fully in the Blood bought redemption of Jesus Christ. There's freedom in Him and peace that passes all understanding.