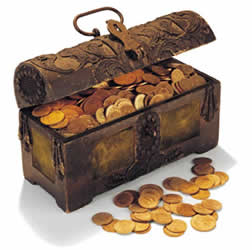 It was late and I was tired, wanting to go to sleep, but God wanted to talk. It was about midnight, but it dawned on me that God does not sleep. His question made me restless: "Where on earth does man keep his most priceless treasures and valuables?"

I said: "Lord, usually these treasures like gold, silver, diamonds and precious jewels are locked up somewhere out of sight with usually guards and security to keep them under lock and key." God spoke: "Like man, My most valuable treasures on earth are also locked up."

I then saw Jesus standing in front of seemingly thousands of prisons and jails. The Lord spoke again, "Those living here have almost been destroyed by the greatest potential to be used and to bring forth glory to My name. Out of these places will come an army of spiritual giants who will free many people who are bound by the enemy of souls. THEY WILL BE RESTORED!"

I then saw the Lord step up to the prison doors with a key. One key fit every lock, and the gates began to open. He then walked in and touched inmates that were thronging Him. Those being touched began to grow into what appeared to be giant knights in armor, like warriors. Then God said: "Go and take what Satan has taught you and use it against him. God and defeat My enemy and build My Church."

Those He had touched passed through the open gates. I saw them walk past many big name ministers and beautiful churches. They attacked the enemy lines and started delivering many from evils' clutches; demons trembled and flew out of sight at their presence. Many, who had worshipped for many years in those beautiful churches stood in awe at what was happening. Rejects of society, street people, outcasts, the poor and despised were being brought into His Church. They were part of the treasures that were missing from His Kingdom.

Then the Lord said: "If my people want to help bring treasures into My House, tell them to go to the street, the homeless, hospitals, and prisons. If not, they will be judged by My Word. For I was hungry and you gave Me no meat. I was thirsty, and you gave Me no drink, I was a stranger and you took Me not in, naked and you did not clothe Me, sick and in prison and you did not visit Me" (Matt. 25:42).