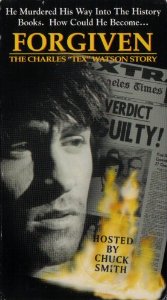 In the beginning, life was too easy for Charles Watson. As a star athlete in high school, many people knew that he was on the road to greatness. But for Charles, life didn't feel complete. He always felt an emptiness inside, something was missing and soon he began searching for that something or someone who would bring fulfillment and purpose to his life. His search led him into the arms of Charles Manson. Manson and his family of followers gave Charles the security and acceptance he longed for. Through the use of free sex and drugs. Manson began to slowly gain complete control of him and the the other family members. By the time Charles realized how much out of control his life was, it was too late! His participation in the murder of the La Biancas had tied him to one of the most gruesome and cold blooded crimes in history. Could God forgive someone like Charles Watson? Charles found out for himself just how merciful God can be.

Film clips with interviews with Charles and Suzan, 28 minutes.