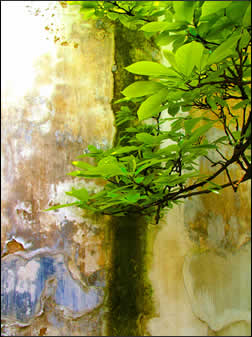 The following is the continuing story of the daughter of one of Charles' victims, who forgave him while on a visit in prison. The first part of this miraculous story is The Miracle of Forgiveness.

Suzan's parents were murdered in the summer of 1969. Even though she understood the victim's plight, she never allowed others to cast her into that roll. Rather, she chose to remain open-minded, not knowing what the future held. Then, eighteen years later, she took the bold step of forgiving me, even after I had committed such a horrible crime against her.

We had both committed our lives to Christ, but still she never told me during our correspondence that it was her parents that I had killed. She wanted to get to know me without the pressure that revealing her identity would have created.

A year later, she visited me in prison. We shared with one another about our relationship with Jesus Christ and about our pasts. When our paths seemed to cross, she revealed to me who her mother and stepfather were, and since that glorious moment, our lives have never been the same.

After months of not telling anyone but close friends, we finally told our story. I feared that someone would try to destroy what God had done. My fears came true. Her loving act has since been ridiculed and exploited in a variety of ways.

But still, I never fully realized how forgiveness would be mocked and hated by the world, much less the persecution that would follow and the great strides by man to stifle our testimony.

Suzan began to stand up for what Christ had done in both of our lives. We began to mature spiritually in new areas as we wrote back and forth. Suzan's courage freed her as new healing took place. I began to realize more fully the pain and destruction that I had caused in the lives of so many. Healings took place that could never have happened in any other way.

As the healing bore fruit, the enemy continued to raise up its ugly head to scandalize God's goodness. Suzan's landlord and employer were called by someone spreading lies, saying she was involved in the Manson cult. The same enemy claimed that Suzan knew me during the time of the crime, as if some plot was taking place. In the days to come, her family would be plagued in many ways. This persecution on her life continues to this day.

My folks were harassed in their small Texas hometown as the enemy spread lies through the local paper, tabloids, and a slanderous book. Not only my folks, but my brother, childhood friends, and loved ones were harassed as well.

The persecution did not let up. My wife and children were harassed by profiteers from out of town, the tabloid talk show types who dispense filthy trash that God hates.

Eventually, we were turned in to a local law enforcement agency. As a result, our home was raided in the early morning hours by the swat team, cameras running, with a search warrant filled with lies.

An investigation fully cleared us and the ministry from any and all wrongdoing. It was a scheme by the enemy to harass our family, to stir-up publicity from coast to coast in order to promote a book defaming Suzan, myself, our families, and what the Lord was doing in our lives.

Why would the enemy inspire individuals to do such a thing? There are several reasons; bitterness, hatred, resentment, vengeance, retaliation, fame, money, justice, politics, just to name a few. Simply put, to steal, to kill, and to destroy, which the enemy has been up to since the beginning of time.

Jesus came to give life and life more abundantly. Suzan, myself, our families, and many of our friends have experienced this abundant life, and the devil hates it.

Forgiveness is born of our love and concern for the well-being of others, all stemming from God's love for us, for "God is love" (1 John 4:16). It is a choice freely made. It is a gift we can give or withhold. And we can reject it when it is offered to us.

Tremendous growth has come as a result of forgiveness. Not only growth from the act of forgiveness, but growth from the persecution. It has been a time of self-examination, purging, and a cleansing from several shortcomings. We can be legal by world standards, but there are always areas that do not meet God's standard.

Jesus says, "Love your enemies, bless them that curse you, do good to them that hate you, and pray for them which despitefully use you, and persecute you" (Matthew 5:44).

During the time of persecution, at all costs, we are to be obedient to God's word. For us, it has been a time of understanding and prayer for our enemies, trying to walk in their shoes. Our sympathy is great for the victims, but we can see that retaliation is not healthy for anyone.

As a result of the attack, new friends have decided to walk with us in the fire. Many have voiced the desire to be part of the work that God is doing to reach the world with the message of forgiveness. Surely, what the enemy thought to be evil, God meant it for good (Genesis 50:20).

Forgiveness is a Must

Like Suzan, maybe you have someone in your life who you desperately need to forgive. Someone who has hurt you tremendously and caused much pain and grief in your life.

Yes, forgiveness is difficult, much more difficult than this message reveals. But as we walk in the Spirit, forgiveness is possible because of the Cross of Calvary, the blood of Jesus Christ, and our resurrected victory.

Forgiveness, like most virtues, is learned in the home. Because forgiveness shows the divine life within us, it is an act of faith.

A deep wound seldom heals overnight, even where the desire to forgive is present. It took Suzan years to take that step. It takes time to heal. Some of my deepest healing did not begin until Suzan took that step.

Forgiveness consoles and heals not just one person, but two, and sometimes more. It is a human need. There are times we all need to be forgiven.

Forgiveness shows courage, frees us from bondage, and gives us greater hope to look ahead for the return of Jesus Christ. We all need forgiveness, and sometimes, we even need to forgive ourselves.

We must recognize that God has forgiven us, and given us the ability to forgive. Without the knowledge of Christ, Suzan would not have been able to forgive, and this message of forgiveness would not be available for God to use through us today.

Will you make God's message available to others through your life?

Jesus wanted His followers to "Be merciful, even as your Father is merciful."

He told them that if they went to pray and remembered a grudge they held, they should leave their gift at the altar and be reconciled first (Matthew 5:23).

It doesn't cost nearly as much for you to forgive someone as it cost our Heavenly Father and the sacrifice of His Son on the cross.

And Jesus gave us His example when He forgave those who had put Him on the cross (Luke 23:24). Forgiveness in difficult circumstances still finds its echo today.

Most of all, Jesus reflects forgiveness, and the same Spirit that made it possible for Jesus to go to the Cross, now lives in the believer, reflecting Him.

As you can see, forgiveness flows from one to another, the direction depending on your need. That is, if you are forgiving someone or the one being forgiven.

Forgiveness demands that the acknowledgment of guilt, to God or to others, be accompanied by an expression of sorrow and an effort to make amends whenever possible.

We are assured of God's forgiveness. It was for this that Jesus came. As Paul observed, "...that while we still were sinners Christ died for us" (Romans 5:8). Old Testament writers also believed in God's forgiveness, "As far as the east is from the west, so far has He put our transgressions from us" (Psalm 103:12).

"Let all bitterness and wrath and anger and clamor and slander be put away from you, with all malice, and be kind to one another, tenderhearted, forgiving one another, as God in Christ forgave you" (Ephesians 4:31-32).

Dear Heavenly Father: I thank You for the riches of your kindness, forbearance, and patience, knowing that your kindness has led me to repentance (Romans 2:4).

I confess that I have not extended that same patience and kindness toward others who have offended me, but instead I have harbored bitterness and resentment.

I pray that during this time of self-examination, You would bring to mind only those people that I have not forgiven, in order that I may do so (Matthew 18:35).

I ask this in the precious name of Jesus Christ. Amen. (List those you need to forgive.)

I now confess my sin of unforgivingness to You, and claim through the blood of the Lord Jesus Christ my forgiveness and cleansing. I cancel all ground that evil spirits have gained through my willful involvement in this sin. I ask this in the wonderful Name of my Lord and Savior Jesus Christ. Amen.