The Ashes of the Red Heifer 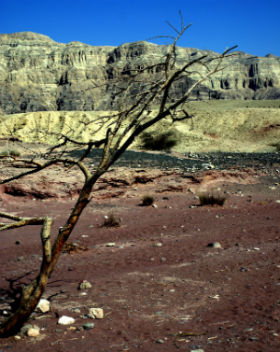 In Numbers 19:1-10 the Lord gives Israel the commandments concerning the Red Heifer. The ashes of this special sacrifice were used to make the water of purification. This water was used to make an unclean person clean prior to their being able to take part in any Temple ceremony or feast day celebration.

According to Jewish teaching:

"The Red Heifer was a completely red (colored) cow that was slaughtered and then burned. Its ashes were used to purify those who had been exposed to the dead (or who had become unclean through other means).

The laws of the Red Heifer have one unusual stipulation: The ashes were divided into three portions. One portion was placed in the Chayl (rampart of the Temple), one on Har Hamishcha (the Mount of Olives), and one was distributed to the Kohanim (the Priests) and was used to purify the priests (throughout Israel). The portion placed on the Mount of Olives was used to purify the Jewish people. The portion placed in the rampart (of the Temple) was hidden as safekeeping for future generations, and was mixed in with the ashes of the Red Heifers slaughtered in subsequent times. The mitzvah (commandment) of the Red Heifer is the only one that has a law stipulating that a portion must be set aside for the future. All other forms of purification were prepared as the need arose."

[From an address by Menachem Schneerson, the Lubavitcher Rebbe (he's a famous Jewish leader), Parshat Para 5749 (1988).]

So, what is the significance of these things for us as Christians? They actually are many, but I will concentrate on only a few in this article. First, it must be noted the ashes of a dead animal would normally make a clean person unclean. Therefore, "The Red Heifer law is completely inexplicable - in effect, it is meant to purify the ritually impure and it defiles all that is pure." -Rabbi Zalman Posner

There is another important thing for us Christians to understand today and it relates to End Time prophecy. It is my belief, and many others, that we are in the last days before the return of Jesus Christ. He will come as the King of the Jews and he will reign upon the earth for a thousand years. He will fulfill all their expectations for a Messiah, as well as all of ours for his triumphant return in glory. However, there are events which still need to be worked out in history before our Lord returns. One event is the rebuilding of the Temple in Jerusalem and the restart of animal sacrifices there. In order for this to take place, it is necessary that the Jews obtain the ashes of a new Red Heifer and also obtain the ashes of an old Red Heifer to mix with them. These would then be used to create the water of purification, whereby a new High Priest could be purified to establish the Holy of Holies and the Temple sacrifice.

Orthodox Jews are desperately looking for a Red Heifer. They have gone so far as to try to genetically engineer one on farms in the United States and in Israel. At the same time, there are Jewish and Christian archaeological digs throughout Israel searching for a container with the ashes of an old Red Heifer in them. Once these are found, a major key to the fulfillment of Biblical prophesy will be in place. So far there appears to be no success in these endeavors, but for political reasons, even if they were successful, they would probably not advertise it.

The last thing for us to realize regarding the ashes of the Red Heifer and the water of purification is that is that this was the water which Jesus used to perform his first miracle, the changing of water into wine (John 2:1-12, see verse 6). Wine is representative of His blood and this water, made from the ashes of the Red Heifer, is therefore also representative of the Blood of Jesus Christ, which purifies us from all sin (Hebrews 10:19-22). We are washed with the "pure water" which represents the water of baptism, the sign of our faith in Jesus Christ.