I'm responsible for the horrific deaths of Steven Parent, Jay Sebring, Voytek Frykowski, Abigail Folger, Sharon Tate, and Leno & Rosemary LaBianca; for my total disregard for their lives, for the excruciating and long-term pain it caused their loved ones, and I'm specifically responsible:

Steven Parent was only 18 years old, heading out to college in the fall, and working two jobs to pay for it. I'm certain he would have graduated, gotten married and had children and even grandchildren by now at 70 years old. His parents, Wilfred and Juanita, and his siblings, Janet, Greg, and Dale were left with a hole in their hearts, crying as a family in bed together. I deplore my callousness, which caused a tremendous emptiness, sadness, and anger, plus the financial cost of burying a son and a brother.

Jay Sebring (35), born Thomas Kummer, was a dear friend to many celebrities in Hollywood and San Francisco where he owned hair salons. His father and mother, Bernard and Margarette, and his brother Fred and wife Mary, and two sisters were traumatized, and emotionally shocked, struggling to depend on God's grace for help. Through the years, the pain I caused passed to their children (one being Anthony), and grandchildren, nieces and nephews, for example, a picture of Manson showed up on a student's T-shirt at school, causing much grief. My actions help put Manson's face on that shirt, which is a disgrace.

Voytek Frykowski (32) was educated in Poland to work in the film industry. He was a big brother, and a father. His parents, Jan and Teofila, as well as Jerry his younger brother were devastated spiritually and emotionally, especially Voytek's 10 year old son, Bartek, who cried his eyes out when they received the news. I took their hopes and dreams as a family, severing relationships, and sending family and friends into severe depression.

Abigail Folger (25) was a debutante, socialite, volunteer social worker like her mother, a civil rights devotee, and coffee heiress. Her death at my hands was a tragedy for her family and friends. Her parents, Peter and Inez were left lonely, heartbroken, and socially withdrawn, while her brother and sister, Peter and Elizabeth were confused with an emptiness left in their hearts, because of my foolish choices and monstrous actions.

Sharon Tate (25) was 8 months pregnant with her son Paul Richard. I took both their lives, showing no mercy, devastating her husband Roman, and Paul and Doris, her father and mother, plus her sisters, Patricia and Deborah. Sharon was a devoted wife, daughter, and sister, the center of her family. I took not only her motherhood, but her future roles as an actress. I took Roman's wife and child, and her parents' grandson, and sisters' nephew, causing an unimaginable emptiness, depression, and anger, which may have resulted in stress-related illnesses for her family.

Leno LaBianca (44), and Rosemary LaBianca (38) were enjoying their second marriages until I took their lives. Leno's father had passed away years ago, but his dear mother Corina, and sisters, Emma and Stella, plus Alice, his ex-wife, and their three children, Corina Jane, Anthony Carl, and Louise were devastated, experiencing extreme pain, and anger for my actions. Rosemary's parents and three brothers were equally shocked, along with Frank, her former husband, and their children, Suzan and Frank Jr. My actions caused Rosemary's children and grandchildren to experience a tremendously painful life, saddened, withdrawn, and socially isolated to this day.

I so deeply regret choosing to commit these crimes, and for causing this enormous pain; mentally, emotionally, physically, spiritually, socially, and financially. As often said, "No parent should have to bury their children," nor hear from the Press that in some way it was their loved one's fault. It was "I" that took their dreams, visions for life, a lifetime of experiences for all, hugs and kisses, childhoods, school and graduations, marriages, and children, vacations, and family reunions for which I apologize to the victims, and their families and friends. I replaced all their joys of life with funerals - unbearable grief, while life went on for me. I am so deeply sorry! (See Victim's Remembrance).

I'm sorry that I wasn't a man of strong character and authority to make better choices and decisions, like I am today. Instead, I left a multitude of questions that can never be answered satisfactorily, since the crimes were so senseless. The agony the victims have endured does not go away, because they are always left wondering, Why?

My disobedience to my church-going parents started at age 15, telling them where I was going instead of asking them. I'd drive to the bootlegger instead of the Dairy Queen. My pride and greed knew better than them. My lust enticed me, while envy told me that I didn't measure up. Gradually, the fear of failure caused resentments and pent-up anger, soon turning into laziness and a guilt-ridden teenager, medicating his pain.

I was separated from God, experiencing all the effects. Following a fraternity brother out West, I moved to California to complete my senior year in college. Actually, I was running from my fears, spiraling downward, making all the wrong choices, working and playing instead of studying: drinking, having sex, and eventually dropping out of college while looking for love and acceptance in all the wrong places.

I found triggers at every turn, making one compulsive choice after the other. My lack of spiritual knowledge left me powerless over temptation, causing emotional insecurity, and not accountable to anyone, until I met Manson. Through my own self-deception, I allowed myself to be gradually radicalized by his delusional beliefs, while trying to find significance, with no goals of my own.

For years, I had looked for approval from others for a sense of worth and happiness, something other people couldn't truly give me -- classic codependency. The "family" shared the same mind, the stronger dominating the weaker, especially while on mind-altering drugs. I chose to ingest "speed" before the crimes, dulling my conscience, and putting myself into a diabolical state of mind, driven by a dark-animalistic spirit of fear. (See Why The Crimes? for more insight).

Throughout my childhood, I appeared to be an All-American boy, excelling in school, scouts, football, basketball, and track & field, receiving many accolades. But underneath the surface, I was suffering from an inability to handle fear and anxiety due to academic pressure from an early age. I was a hard worker (taught to save for college from birth), but I was somewhat a lazy student. I grew to resent my parents for mapping out my life. The more my older siblings succeeded, the greater my fear of failing. I began to experience hurts (unmet needs), frustrations (unmet expectations), and insecurities throughout high school, being the only child left in the nest.

I based my identity, worth and acceptance upon my performance, releasing my anger through sports, and medicating my pain with alcohol, sex, and fast driving. I had no idea these were developing character defects, and together with causative factors (people, places, and things) would lead to the contributing factors of crime. For August 1969, they were delusional beliefs, cultist associations, drugs (speed), fear of rejection (guilt & shame), self-centeredness, negative self-talk, and pent-up anger behind the weapons were regretfully the driving force.

Specifically, I was led to believe that I owed Manson a favor. I felt I needed to prove my loyalty to him and the family by bending to his will. He knew that I was guilt-ridden and vulnerable to manipulation, and felt responsible for his happiness, and therefore would be easy to convince. It was all linked to my deep sense of failure and inadequacy that always haunted me. I struggled terribly with perfectionism, feeling I had to be faultless in order to be accepted, which I found to be a lie through my recovery process. (See more in-depth insight on the site, Insights Into My Behavioral Change, noting My Behavioral Exchange chart).

After the crimes, it didn't take long for me to see that my delusional beliefs weren't coming to pass as the motive for the crime. There wasn’t a black and white race war where the blacks would kill off "whitie", and they'd asked Manson to be their leader. I was the fool, who lacked judgment or good sense, not thinking of the consequences, since the world as we knew it was coming to an end.

In turmoil with no place to hide, I turned myself into the Sheriff, after he came looking for me at my parents home where I was staying in Texas. My recovery began on November 30, 1969, when I came face to face with resentments, blaming, and anger towards my parents for no justifiable reason. They were not my enemy – sin, bitterness and pent-up anger were. My mother became instrumental for me to address my issues.

Here are six (6) ways that I have addressed my issues (See: Life Learning for a complete file).

After becoming a born-again Christian in May 1975, I joined a group called Yokefellows, based on Matthew 11:28-30, where Jesus said: "Come to Me, all you who are heavy laden, and I will give you rest. Take My yoke upon you and learn from Me, for I am gentle and lowly in heart, and you will find rest for your souls. For My yoke is easy and my burden is light." He was speaking to me! 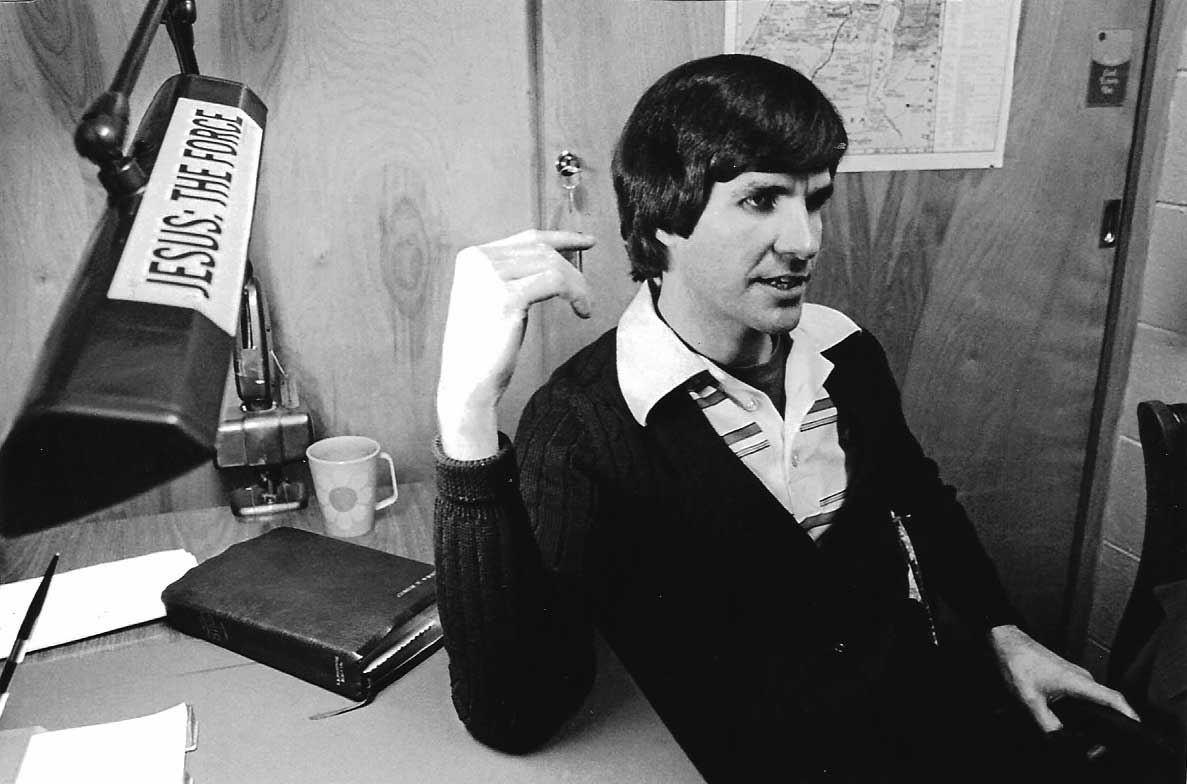 Charles sitting at his office desk in 1977, ministering in the CMC-E chapel.

I hope you can respect that sharing my recovery has become my sole vocation and calling in life to help others recover too.

Finally, I was able to make my parents proud, though they did not live to see it. I determined to finish college for myself.

These self-help groups have added great value to my recovery, especially the Victim Awareness Offender Program (VAOP), and the Houses of Healing book/group, where I was led to create a chart, so that men could better understand the powerful concept.

For the past half-century, I have been in recovery, without relapsing once. I believe, "... if anyone is in Christ, he is a new creation; old things are passed away; behold, all things have become new" (2 Cor. 5:17). I'm not boasting in myself, but in the power of the Lord Jesus Christ, Who has set me free from the bondage that once held me captive. He made me a new creation by transforming my life from the inside out!

Lastly, as you know, the crime themselves will never change, but I have. They will always demand justice, for someone to pay the price, but I believe there is more to be considered in light of God’s grace. Our heavenly Father says that He requires three (3) things of us, that is, " ... to do justly, to love mercy, and to walk humbly before the Lord" (Micah 6:8). That's what it will take to set me free physically, for mercy and humility to meet together and reign in the hearts of those who are in authority. I pray simply for God's will to prevail, thank you!